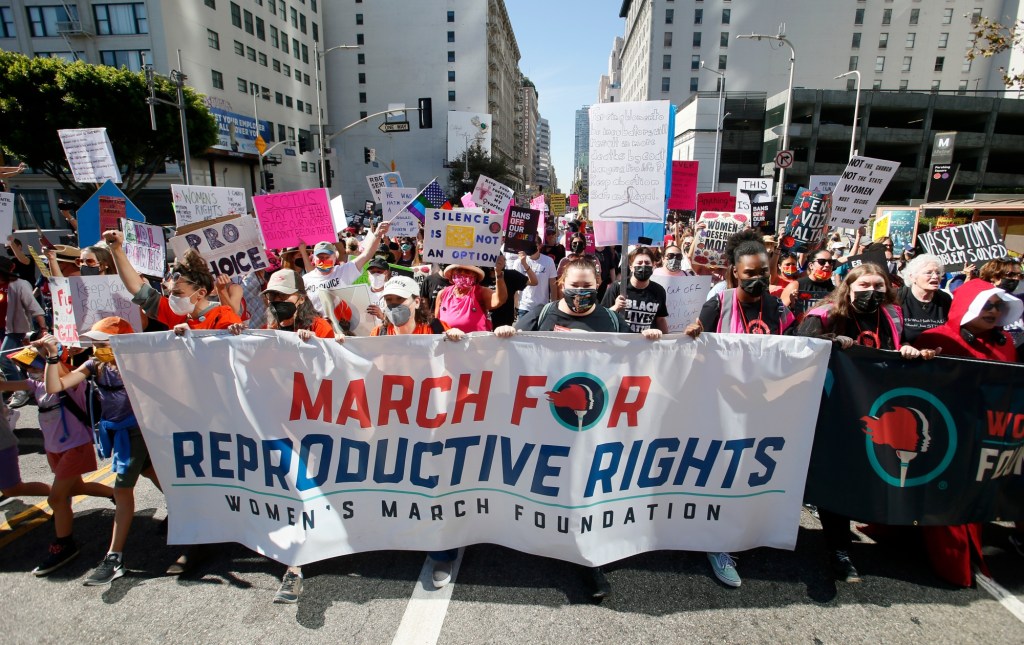 Tens of thousands of people are expected to take to the streets and gather in parks across Southern California on Saturday, May 14, for rallies organized in support of reproductive rights.

Many of the “Bans Off Our Bodies Abortion Rally” events were planned even before the May 2 leak of a draft Supreme Court opinion indicating justices plan to undo federal protections around abortion access that have existed for half a century under Roe v. Wade. In fact, Emiliana Guereca, a co-founder of the Women’s March Foundation, said they first learned about the draft opinion after looking into why there was a sudden, dramatic spike in registrations for the rally planned for the steps of Los Angeles City Hall.

“At this point we are getting a few registrations a minute,” she said.

A good number of participants are telling organizers they haven’t supported Women’s March events before, Guereca said, including when an estimated 750,000 people marched at the event in Los Angeles after President Donald Trump’s inauguration in January 2017.

“They thought that we were wrong and that Roe v. Wade would never fall, or that this would not be possible in the United States,” Guereca said.

“But whether you are a Republican or a Democrat, women’s rights are on the line. That should have never been politicized.”

While advocates expected the Supreme Court to unwind Roe this summer, organizers of a planned rally at Centennial Park in Santa Ana said they were struggling to build a sense of urgency around the threat to abortion rights — before the opinion was leaked.

At the start of May, they had 400 people signed up to attend Saturday’s event, according to Sadaf Rahmani with Planned Parenthood of Orange & San Bernardino Counties. Within two days of the Roe leak, that number tripled. They now expect as many as 5,000 people who will hear speakers, share their testimonials, make signs and build support for candidates and legislation that supports abortion access.

“I think the leak was a huge wakeup call for people,” said Nichole Ramirez, who’s also with Planned Parenthood of Orange & San Bernardino Counties. “Now they’re fired up and they’re angry — as they should be. We’ve never lost a constitutional right before.”

There was no word Friday of any major plans for counter-protests or corresponding anti-abortion rallies. But Ramirez said they have been working with the local police department and are providing their own security to make sure it’s a “safe, family-friendly event.”

Organizers are encouraging supporters to take public transportation, ride-sharing services or carpool, particularly to the LA event. And since Saturday is expected to be hot, nearing 100 degrees in places like Riverside, they recommend bringing plenty of water, hats and sunscreen.

Here are details about the major events taking place across Southern California.

A volunteer-organized march will start at 9 am at Pershing Square, at 532 S Olive St. Supporters will walk just under a mile to Los Angeles City Hall, at 200 N. Spring St.

An official Women’s March rally is planned at City Hall from 10 am until at least noon. A growing list of politicians, advocates and celebrities are scheduled to speak, including US Sen. Alex Padilla, attorney Gloria Alred and actress Ricki Lake.

A Planned Parenthood-organized rally is scheduled from 10 am until noon at Centennial Regional Park, at 3000 W Edinger Ave. in Santa Ana. No march is planned.

Speakers include Rep. Katie Porter, D-Irvine, and Lt. Gov. Eleni Kounalakis. There will be a sign-making station and supporters will be able to write their own testimonials on a “Say Abortion” mural.

Assemblywoman Sabrina Cervantes, D-Riverside, is a scheduled speaker along with representatives from Planned Parenthood, the Riverside County National Organization of Women and other organizations.

For this volunteer-organized event, supporters will meet at 10 am at the Temecula Duck Pond, at the intersection of Ynez and Rancho California roads.

They’ll then march just over a mile to Temecula City Hall, at 41000 Main St. During a rally there until 1 pm, they’ll listen to speakers and music and share testimonials

The organization MAEVE Burbank is hosting a march that will start at 10:30 am at the intersection of North Mariposa Street and Chandler Boulevard. Supporters can march along the Chandler Bike Path toward Buena Vista, then march back and finish at the Mariposa Street end of the path at around 11:30 am