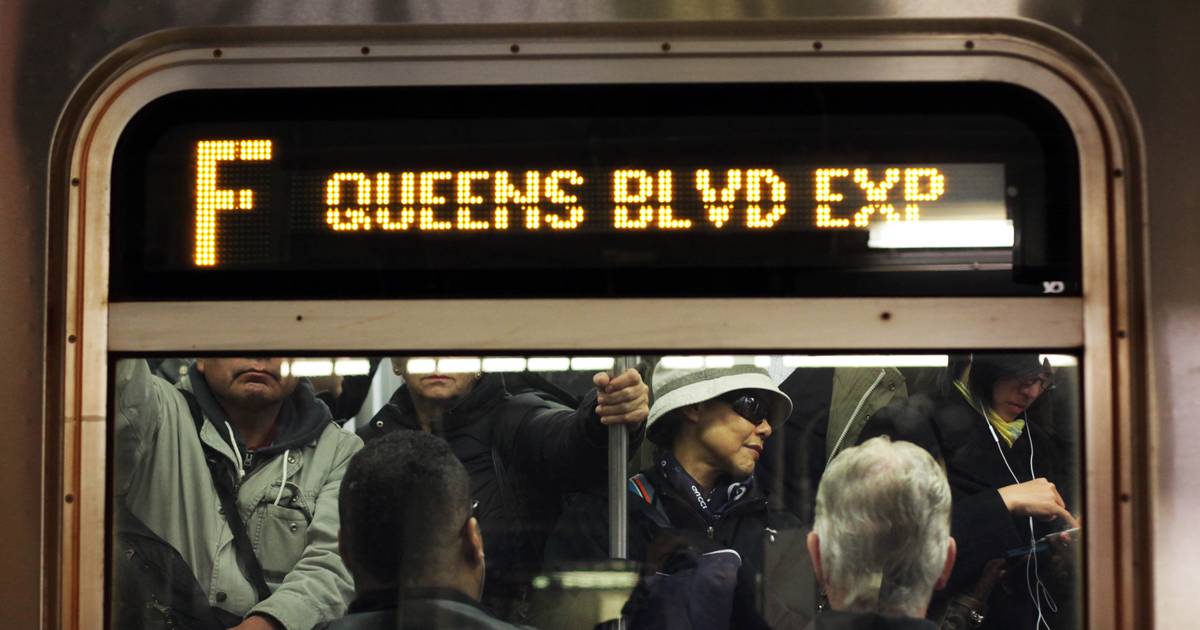 Brooklyn: F train service is suspended between Church Ave. and Stillwell Ave. in Brooklyn for the next few weekends. This has been happening on and off for the last two years already and seems to be continuing for at least another year.

There is no shuttle bus replacement. The signs, which sometimes go up Wednesday, Thursday or even Friday right before the weekend, say to take a bus to the nearest train (N, Q or D). At stations where there is no bus, such as Avenue P, where I live, it says to walk to the nearest train 15 minutes away. What happens if the next bus isn’t coming for 20 minutes?

Many times, I’ve seen someone with a stroller or shopping cart trying to go to Manhattan on their day off only to get to the station and give up. Older people who have an appointment two miles down the subway line from where they live come to the station and then try to figure out how to get a car service, and get to their appointment late. These people don’t have apps. Every Sunday morning for the last year and a half, I call the MTA to find out if the F train is running past Church Ave.

Every station is supposed to have at least one train servicing it. If not, they have a shuttle bus. You should be able to use the public transportation system no matter where you are. Last year, the F wasn’t running for two weeks between 1-5 am They had a shuttle bus, even during the weekend! Where is it for regular daylight hours? Ezra Shane

Yonkers: SE Cupp’s column “Is the New York I used to know gone for good?” (April 20) was alarming, dismaying and, sadly, very possible. Drastic times call for drastic measures. Do you recall after 9/11 how the subways and commuter train lines were flooded with soldiers armed with AR-15s? Dog handlers walked the train cars and platforms and a feeling of confidence permeated these caverns that dissuaded terrorist and thief alike. Maybe it’s time for them to return in order to restore that confidence once again and return our great metropolis to a place where everyone can ride the subways without concern of victimization. Thomas J Mullen

Brooklyn: Every time they close the Verrazzano and Gowanus bridges for an event, the people in Bay Ridge and others passing through suffer. In Bay Ridge, there are only five overpasses in the first two-and-a-half miles of the Gowanus Expressway. The NYPD provides no support in keeping the intersections of these overpasses from becoming gridlocked. Last Sunday, I got stuck at Fourth Ave. and 92nd St. for 45 minutes. My brother waited an hour to get from Bay Ridge to Dyker Heights. Once the intersections are gridlocked, you can’t escape to find another way. We need traffic agents at these locations to keep the intersections open. I am lucky I didn’t need any emergency services. This is a safety issue that the city needs to fix. People are fed up and some have suggested interfering with the next event to force the issue. greg ahl

Mount Sinai, LI: For crying out loud! Check out Numbers 5, verses 12-30 in the Bible! Abortion is kosher with the Almighty! Enough already! Karl Bean

Tarrytown, NY: To Voicer Vanessa Pallotto: Where you point out that we are deluding ourselves into thinking that abortion is a right, you’re forgetting about the rights of women making decisions about their own bodies. You make yourself the sheriff of all women’s rights. You can be pro-life, which is fine, but who are you to protect the fetus of someone else? Unless you think that all laws start with you, a woman is not some kind of vehicle to carry a child for your benefit. If it is your religious belief, good for you. What gives you the right to oversee someone else’s unborn fetus? You’re making an argument for your beliefs, and that’s where it ends. Jaime Geiger

Hartsdale, NY: Seeing the turmoil caused by the leaked Supreme Court decision (which is what that is) leads me to wonder why anybody is surprised. The Trump Party (not “Republicans”) has been methodically working toward this goal for years. Anyone paying attention should have expected this, among other things. The overall goal of the Trump Party is simple: Restore the Confederacy. Do this by disenfranchising and/or discouraging Black voters, restricting information to schoolchildren and enfranchising anything Donald Trump says. Add to this the rewriting of history books back to 1950s levels, rejecting any dissonant voices as woke and ignoring all the real problems America has, and voila! The new awakened America. There’s just one thing more: The website Smartest States shows us that out of the 17 states lowest in intelligence, 11 are former Confederate states. So let’s go with that. Norman E. Gaines Jr.

Manhattan: It is interesting that the justices who will decide the future of women’s reproductive rights are not doctors and only one is a woman, so their opinion is based on legal theory, not a medical fact. Justice Samuel Alito based his argument on the idea that the Constitution “does not protect a right to abortion” while neglecting to say that it did not prevent a right to an abortion. How could he forget that part of his well-thought-out opinion of him? Carl Maury

Manchester, NJ: To Voicer Tom Ascher: We “couldn’t even define what a woman is”? That question was not answered as it was the stupidest to ever be put before a candidate. Suppose you write in to this page and describe what your answer to that would be. Let’s hear you make a fool of yourself. The intelligent candidate should be applauded for her silence from her. Alan Berman

Jamaica: We need more Democrats in the Senate and in the House of Representatives in order to protect what we already have. We were cheated out of three choices for Supreme Court justices and look what happened. We have no security with the laws that are already in place. With the leak of the horrible abortion rights draft opinion, we can expect that those appointments will not only affect women but other groups, such as LGBTQ rights, interracial relationships, civil rights, voting rights and more. The Republicans and the Supreme Court of the United States are taking us backward in time. Go vote! God help us! Charlene Black

Huntington, LI: Our long-time wonderful news delivery person retired to raise her family. Good luck, Maria, and much happiness! Thank you for the great service over the years. However, it took a while and some phone calls for the paper delivery to start up again. Doesn’t The News have people to fill in and deliver the paper? leonard stevenson

Traverse City, Mich.: Masks not needed, say the authorities. Infected carriers are everywhere and unmasked, coming to a store, plane, train and automobile near you. It means that the vulnerable, the elderly and very young, are in the mix to get infections in every venue. Darwinism at its worst. Joseph Coffmann

Port Jefferson Station, LI: I am shocked and dismayed, yet not surprised, by the idiocy of the state’s Climate Action Council wanting to force all New Yorkers to install electric heating while removing natural gas as an energy producer. This is government overreach to the extreme, yet we seem to be sheep and accept being led to financial slaughter. The people who propose this action are not living in a reality-based world. They are enthralled by the shiny new object called green energy, yet they are oblivious to the overall destruction of people’s lives and livelihoods that such a change would bring. I hate to bring politics into this issue but here the Republicans are correct — way too much government messing with people. These politicians must be removed in the next election cycle. Bob Cavaliere