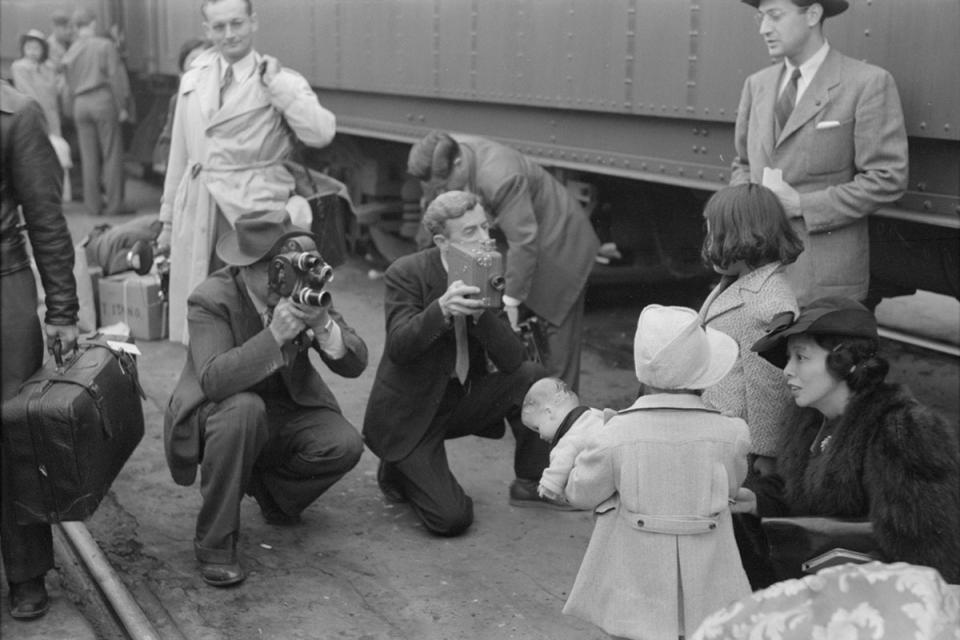 It is hereby ordered that from and after 12 o’clock noon, PWT, of Saturday, May 9, 1942, all persons of Japanese ancestry, both alien and non-alien, be excluded from that portion of Military Area No. 1 described as follows…

On Saturday, May 9, 1942, the lives of Japanese Americans in Little Tokyo, Los Angeles, were forever changed. They were given until noon to dispose of their homes and possessions; then they were made to leave. In the euphemistic language of US government policy, Japanese Americans all along the West Coast — some 120,000 individuals, 37,000 of whom resided in Los Angeles — were “evacuated” to “relocation centers.” In reality, they were put on buses and trains and shipped off to concentration camps where they would live for years, in some cases until after the end of the war.

Opening exactly 80 years after that Saturday in May when Little Tokyo’s streets were emptied, BeHere / 1942: A New Lens on the Japanese American Incarceration mobilizes a variety of media forms to let visitors engage in new ways with this dark historical moment. The forced expulsion of Americans of Japanese descent from Los Angeles and other cities was extensively documented by professional photographers; images of families waiting to be taken off to the camps have come to stand as icons of the incarceration. Through careful curation of little-known photographs by Dorothea Lange and Russell Lee, some presented in hyper-enlarged form or reimagined as video, Be Here / 1942 invites visitors to see things in the photographic archive that they never knew were there. Cutting-edge augmented reality (AR) technology takes the discovery a step further, inviting visitors to become photographers themselves, actually participating in the scene.

The exhibition inside JANM is complemented by a groundbreaking public AR installation in the plaza between the Museum’s main campus and the historic Nishi Hongwanji Buddhist Temple. Here, a dedicated Be Here / 1942 app lets visitors step into the past, and walk among Japanese Americans on the verge of leaving for the camps. Realized with the participation of members of the local Japanese American community, this recreation includes three people who themselves experienced life in the camps as children.

Created by the visionary Japanese media artist Masaki Fujihata and co-presented by JANM and the Yanai Initiative for Globalizing Japanese Humanities at UCLA and Waseda University, Tokyo, BeHere / 1942: A New Lens on the Japanese American Incarceration is an exhibition you won’t want to miss. A catalog created to accompany the exhibition will be available at the JANM Store and through the Yanai Initiative webpage.

On May 7, join JANM for a conversation with Fujihata and National Book Foundation Lifetime Achievement Award medalist, Karen Tei Yamashita, about the exhibition and installations. Like the exhibit and installations, this event is co-presented by JANM and the Yanai Initiative for Globalizing Japanese Humanities at UCLA and Waseda University, Tokyo.

*In person ticket includes admission to the museum galleries.