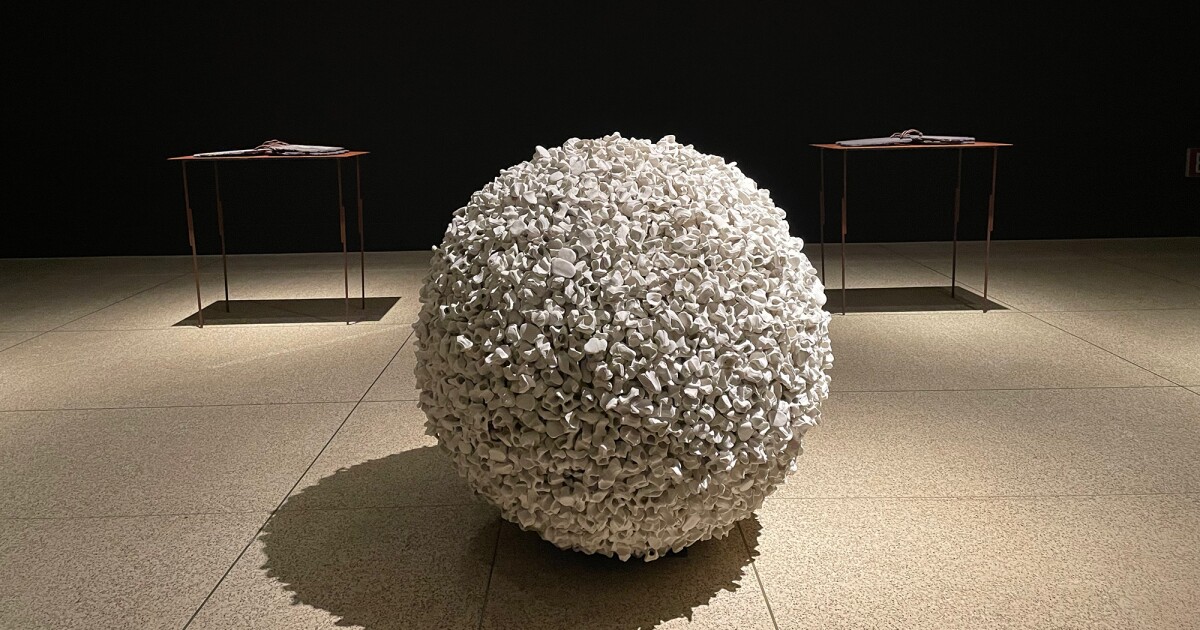 ‘Earth Book/The Sphere of Things to Come’ by Fernando Casasempere

San Diego Museum of Art just opened an exhibition of works by contemporary Chilean artist Fernando Casasempere, with multiple gallery rooms dedicated to four distinct series of his work: “Reminisces,” sculptures made from smaller clay blocks; “Diaspora,” a series of salt-crust-like wall works plus a zoomed-in, sculptural echo on the floor; “Reframing Our Relationship to the Earth,” (which is literally a giant pile of soil in the fine art museum), adorned with curiously bone-like ceramic pieces intended as metaphoric seed planters; and “Earth Books,” a set of chunky clay tablets bound together like books, placed open in various “pages,” and situated around the massive sphere made of what look like tiny bones. Those small pieces were in fact formed by pressing clay into nooks and crannies in the body.

This is Casasempere’s first solo exhibition in the US, and he works with his own clay mixtures that use “reloves,” or cast-offs from industrial copper mines. Soil holds immeasurable history, and it will also be, in some form, part of the future, and Casasempere’s works touch on the fragility of the climate and landscapes, especially as humans continue to abuse the planet’s natural resources.

In “Earth Books,” Casasempere suggests that the clay is the archive for human (and geological) history. There’s an unsettling inclination to lean in close, trying to find something to read. Each of the books is situated around the sphere (ie, the planet) — which is rendered nearly unrecognizable by the bone-like fragments (ie, human impact).

In 2017, the Museum of Contemporary Art San Diego held their first solo exhibition by a Black woman — almost exactly five years ago. Andrea Chung’s “You broke the ocean in half to be here” included a series of works centering around colonialism and the lionfish: an invasive species that decimates prey that native populations depend on, particularly in coral reefs.

One of the works from that 2017 exhibition is “Filthy water cannot be washed,” a stunning, oversized piece, spanning 20 feet in width. It’s a patchwork of 32 individual large sheets of paper, adorned with cyanotype, watercolor and gouache. The work is hung without a frame, which makes it extra striking. A wall of a deep, warm cyan dotted with imprints of lionfish momentarily makes us feel like we’re underwater, but the texture is earthy and grounding. Lionfish may be predatory invaders, but when rendered in cyanotype they seem ghost-like and fragile.

Part of the permanent collection on view at the newly reopened MCASD La Jolla, this work is an unforgettable piece in a building full of greats.

‘Limits of your Safe Space’ by Shinpei Takeda

Japan-born, Tijuana- and Germany-based artist Shinpei Takeda has a new solo exhibition opening at Oceanside Museum of Art this month. While this is a multi-part, mixed-reality installation, it’s very much a singular work: an expression of Takeda’s study of safety.

Takeda worked with refugees, veterans and immigrants from around the world, gathering their stories and trying to understand the different places in which they found refuge or danger — whether physical spaces or digital, psychological or social realms.

These stories evolved into visualizations, and then into augmented reality, which Takeda has included in the work along with a constructed, built environment that’s also based on those explorations in the workshops.

There’s barbed wire twisted into something beautiful or a hole punched in a wall — I especially love the way Takeda uses lines, curves and vanishing points in his large-scale pieces.

The great American sculptor Mark di Suvero (born in 1933) has a large 2018 work of bright red painted steel parked in the front courtyard at La Jolla’s long-running Tasende Gallery, visible from the sidewalk. Di Suvero’s works have been installed around the world for decades, and Tasende has a significant collection of his work by him on view in an exhibition through late June. The exhibition includes several large sculptures, as well as smaller sculptures indoors and works on paper.

Many of di Suvero’s sculptures feel industrial, with massive beams of steel bolted and welded together, something akin to remnants from a construction zone, but the angles and the lines — to say nothing of the shiny paint in vivid colors — are far too dramatic for building scraps but never too precious. Di Suvero is known for wanting his works from him to be climbed on and touched, and when this work was recently installed at the San Luis Obispo Museum of Art, the dance company Movement Arts Collective choreographed a work inspired by — and performed on — the sculpture. Many of di Suvero’s works evoke movement, some literally, while others just make you feel like something’s moving, like in “Mamma Mobius,” with its sweeping loops in the suggestion of its namesake strip.

Mesa College Art Gallery has been working on installing public works throughout the campus, and one that caught my eye recently is Cheryl Sorg’s tape-art elevator decor. Sorg was invited to cover the entire inside of an art department elevator with her signature portals (have you seen any around San Diego?) and rainbows made of brightly colored tape.

Sorg’s work suggests an obsessive, meticulous attention to detail and an almost hunger for color, whether in these portals or in her shimmery film sculptures. Don’t let the playful color and “Instagrammability” distract you from Sorg’s invitation here. Each tape portal is a possibility, a chance to escape and be transported — not just to the next floor. Enjoy the ride.

Sorg’s elevator will be on view for approximately two years, and the gallery has one other elevator that they hope to announce plans for soon.

Click here for information on the installation. The elevator can be accessed during weekdays (Monday through Thursday from 9 am to 8 pm and Friday from 9 am to 5 pm), and you can find it just through the metal gates near the art gallery and parking lot 1, and it takes you up to the main part of campus. Mesa College Art Gallery, 7250 Mesa College Dr., Linda Vista. Free.